The Hard Thing About Hard Things: Building a Business When There Are No Easy Answers

is essentially a management book for founder/CEOs. It’s also probably the best in that sub-genre.

Management books tend to be written by management consultants and academics who study companies that are in their heyday (not at war) and who tend at any rate not to have personal experience as wartime or peacetime CEOs.

But Ben Horowitz, former cofounder and CEO of software company Opsware, which was acquired by Hewlett-Packard for $1.6 billion in 2007, has had both. The Hard Thing About Hard Things is a distillation of the lessons he learnt turning around a company that was about to run out of money during the nadir of the dotcom bust, interspersed with matching lyrics from his favourite rappers. 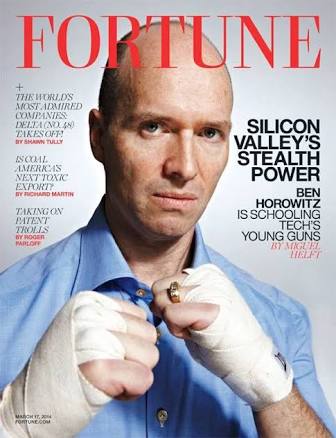 After selling to HP, he and Marc Andreessen (former Opsware Chairman who also founded Netscape and Mosaic) re-invented themselves as venture capitalists, despite the static hold only a handful of firms have on most of the sector’s returns. Their firm, Andreessen Horowitz, or ‘a16z’ (so named because there are sixteen letters between the ‘a’ in Andreessen and the ‘z’ in Horowitz), is, after only seven years, one of the Valley’s most successful. To give an idea of how incredible this is, when they established ‘a16z’ in 2009, of the USA’s 800 VC firms, only about 6 brought any meaningful returns to their investors. (Tad Friend wrote a great article in The New Yorker about Andreessen, the firm and the unorthodox techniques it used to hit success).

With a record of both building and advising great companies, Horowitz is an authority on entrepreneurial management too good to ignore. Read this book if you want to know: why Mark Zuckerberg doesn’t give his employees long, fancy titles and why Marc Andreessen does; why perks don’t equal culture; why startups should train their employees; when and for what roles to bring in older, external people versus internal promotion; when to sell (Answer: if you’re not the best offering in a growing market); how to give elite feedback (Hint: it’s not the ‘shit sandwich’ technique of positive, negative, positive feedback); and much more.

Nonetheless, there are many bits of advice and experience that can help with the hard things.”

> Tell it like it is. Horowitz writes that, “My single biggest improvement as CEO occurred on the day when I stopped being too positive.” Although keeping an unwaveringly happy face to the company seems intuitively sounder advice, being transparent is imperative for two reasons. First, people will trust you, making communication overall more efficient. And second, the company’s best brains will be cognizant of its biggest problems, if those problems are allowed to air. Bad news should travel fast, and good news should travel slow.

> Hire for strength, not lack of weakness. Inspired by General Patten’s maxim, this was a key hiring principle Horowitz learnt as CEO of Opsware, which led him to make some profoundly successful hires. The principle can be elaborated to read: prefer a hire with an exceptional skill or attribute that the company desperately needs at this moment in its development, even if the hire has one or more clear weaknesses, over a hire with zero downside but no outstanding strength. Using this logic, Horowitz hired Mark Cranney to head Opware’s sales team, against the best advice of his board. Despite being socially awkward, a non-cultural fit and educated at a middling university, Cranney was a “sales savant” who could crack the whip on salespeople in a “wartime” context. During his tenure, sales increased tenfold, employee attrition was very low and customers were managed fairly and honestly.